The next phase in the  Russia-Ukraine crisis has begun, as Russia has launched attacks on Ukraine. With a war underway, it’s unsurprising that the markets are reacting. Before the market opened on Thursday, U.S. stock futures were down between 2 1/2 percent and 3 1/2 percent, while gold was up by roughly the same amount. In addition, the yield on 10-Year U.S. Treasury securities has dropped sharply. International markets were down even more than the U.S. markets, as investors fled to the more comfortable haven of U.S. securities.

The Markets Are Being Hit Hard

News of the invasion is hitting the markets hard right now, but the real question is whether that hit will last. It probably will not. History shows the effects are likely to be limited over time. In retrospect, this event is not the only time we have seen military action in recent years. And it’s not the only time we’ve seen aggression from Russia. In none of these cases were the effects long-lasting.

Let’s look back at the Russian invasion of Georgia and the Russian takeover of Crimea, which is part of Ukraine. In August 2008, Russia invaded the Republic of Georgia. The U.S. markets dropped by about 5 percent, then rebounded to end the month even. Then, in February and March 2014, Russia invaded and annexed Crimea. Again, the U.S. markets dropped about 6 percent on the invasion but rallied to end March higher. In both of these cases, the initial market drops were erased quickly.

We essentially see the same pattern when looking at a broader range of events. For example, the chart below shows market reactions to other acts of war, both with and without U.S. involvement. Historically, the data shows a short-term pullback—as we will likely see today—followed by a bottom within the next couple of weeks. Exceptions include the 9/11 terrorist attacks, the Iraqi invasion of Kuwait, and, looking further back, the Korean War and Pearl Harbor attacks.

Still, even with these exceptions, the market reaction was limited both on the day of the event and during the overall time to recovery. Moreover, comparing the data provides valuable context for recent events. For example, as tragic as the invasion of Ukraine is, its overall effect will likely be much closer to that of the Russian invasion of Ukraine in 2014, in which Russia annexed Crimea than it will be to the aftermath of 9/11.

But even with the short-term effects discounted, should we fear that somehow the war or its impact will derail the economy and markets? Here, too, the historical evidence is encouraging, as demonstrated by the chart below. Returns during wartime have historically been better than all returns, not worse. Although the war in Afghanistan is not included in the chart, it too matches the pattern. During the first six months of that war, the Dow gained 13 percent, and the S&P 500 gained 5.6 percent. 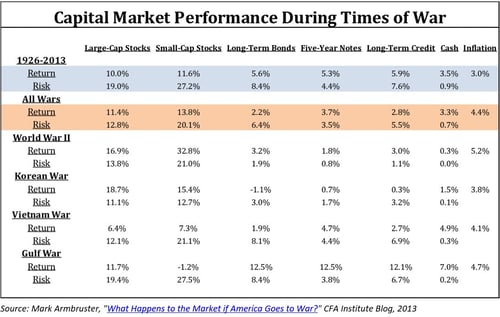 Returns for a wartime period are calculated as the index’s returns four months before the war and during the entire war itself. Returns for “All Wars” are the annualized geometric return of the index over all “wartime periods.” Risk is the annualized standard deviation of the index over the given period. Past performance is not indicative of future results.

This data is not presented to say that the Russia-Ukraine crisis won’t bring real effects and hardship. Oil prices are up to levels not seen since 2014, which was the last time Russia invaded Ukraine. Higher oil and energy prices will hurt economic growth and drive inflation worldwide, especially in Europe and the U.S. This environment will be a headwind as we advance.

Will we see effects from the headwind caused by the Ukraine invasion? Very likely. Will they derail the economy? Not likely at all. During recent waves of Covid-19, the U.S. economy demonstrated substantial momentum, which should move us through the current headwind until markets normalize. Moreover, as has happened before, we already see U.S. production increase, which should help bring prices back down.

The Ukraine invasion has created current market turbulence; we should look at what history tells us. First, past conflicts have not derailed either the economy or the markets over time. Historically, the U.S. has survived and even thrived during wars.

What This Means for Portfolios

Although the current events with the Russia-Ukraine crisis have unique elements, they’re more of what we’ve seen in the past. Events like yesterday’s invasion do come along regularly. Part of successful investing—sometimes the most challenging—is not overreacting. If you’re comfortable with the risks you’re taking, you might not be making any changes—except perhaps to start looking for some stock bargains. Consider whether your portfolio allocations are at a comfortable risk level if you’re worried. If they’re not, talk to your advisor.

This material is intended for informational/educational purposes only. It should not be construed as investment advice, a solicitation, or a recommendation to buy or sell any security or investment product. Certain sections of this commentary contain forward-looking statements that are based on our reasonable expectations, estimates, projections, and assumptions. Forward-looking statements are not guarantees of future performance and involve certain risks and uncertainties, which are difficult to predict. All indices are unmanaged and are not available for direct investment by the public. Past performance is not indicative of future results. The S&P 500 is based on the average performance of the 500 industrial stocks monitored by Standard & Poor’s. The Dow Jones Industrial Average (‘the Dow’) is a price-weighted measurement stock market index of 30 prominent companies listed on stock exchanges in the United States.

Engage with the entire Blakely Financial team at WWW.BLAKELYFINANCIAL.COM to see what other expert advice we can provide towards your financial well-being.

Blakely Financial, Inc. is an independent financial planning and investment management firm that provides clarity, insight, and guidance to help our clients attain their financial goals.

Diversification and asset allocation programs do not assure a profit or protect against loss in declining markets, and cannot guarantee that any objective or goal will be achieved.