Whether you’ve seen the prices at the pump, clicked on the headlines, or overheard discussions in the grocery store, you know the rising cost of gas has everyone talking. At the start of the summer driving season, the average price of regular gasoline in the U.S. reached an all-time high, surpassing $4.50 per gallon. Inflationary pressures, including strong demand, supply chain disruptions, and low inventories, have caused price spikes for many consumer goods. As the cost of filling your tank rises, you’re likely wondering which markets factors caused the spike in gasoline prices.

Crude oil is the most important input cost for gasoline. This commodity is primarily refined into gasoline and other transportation fuels, including diesel and jet fuel. Ethanol, a fuel made from corn, is blended with crude oil to represent 10 percent of gasoline volume on average, according to the Energy Information Administration (EIA). Operating costs associated with refineries, transportation (e.g., pipelines, tankers, trucking), and gas stations, as well as federal, state, and local government taxes, contribute to gasoline prices. Differences in operating costs and taxes explain the wide range of gasoline prices across states.

Figure 1 illustrates the strong correlation between the prices for gasoline and crude oil, which is currently around $115 per barrel for West Texas Intermediate (WTI), the U.S. index. Prices for both commodities have just about doubled since early 2021. Covid-19 lockdowns in China and plans by several countries to release strategic oil reserves helped ease oil prices in recent months. The price of gasoline, however, has continued to increase. 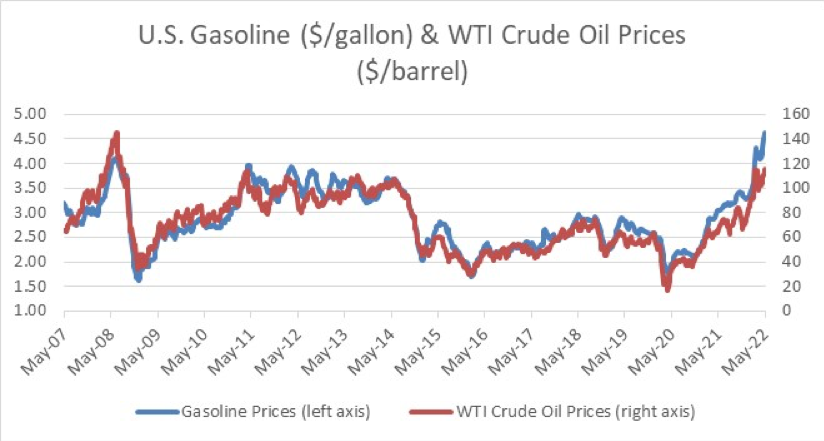 Demand for transportation fuels, such as gasoline, dropped sharply early in the pandemic when consumers stayed home, causing several refineries to close permanently. Global refinery capacity fell in 2021 for the first time in 30 years, according to the International Energy Agency (IEA). U.S. refinery capacity dropped to 2015 levels, as shown in Figure 2. Additionally, existing U.S. refineries have limited spare capacity with utilization rates above 93 percent, the highest since December 2019. Meanwhile, refiners are generating record profits from strong demand, capacity constraints, and a higher spread between prices for oil and refined products, such as gasoline. 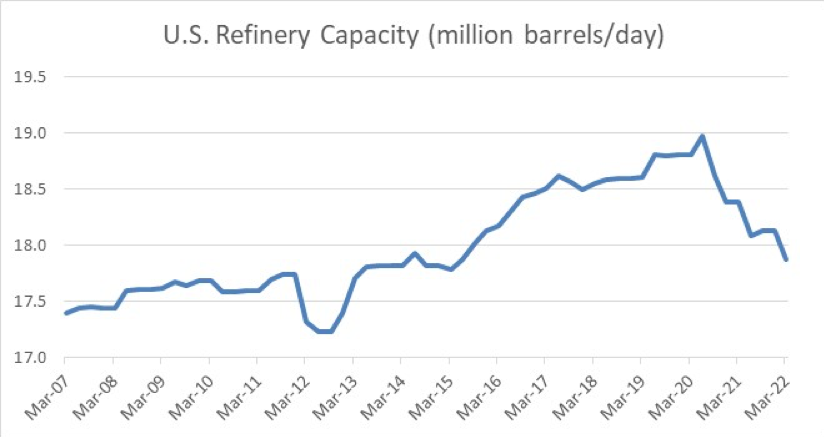 Both U.S. gasoline and oil inventories are at low seasonal levels compared to the five-year range, as shown in Figure 3, which highlights U.S. gasoline inventories. Gasoline and oil demand recovered faster than supply over the past two years while the economy bounces back from the pandemic. Refineries typically boost output before demand peaks during the summer; however, capacity constraints limit supply increases. Although the U.S. still imports oil because its refineries were initially designed to process heavy crude produced from other countries, such as Canada and Venezuela, higher U.S. exports have reduced inventories as Europe seeks to reduce its reliance on Russia for energy imports. 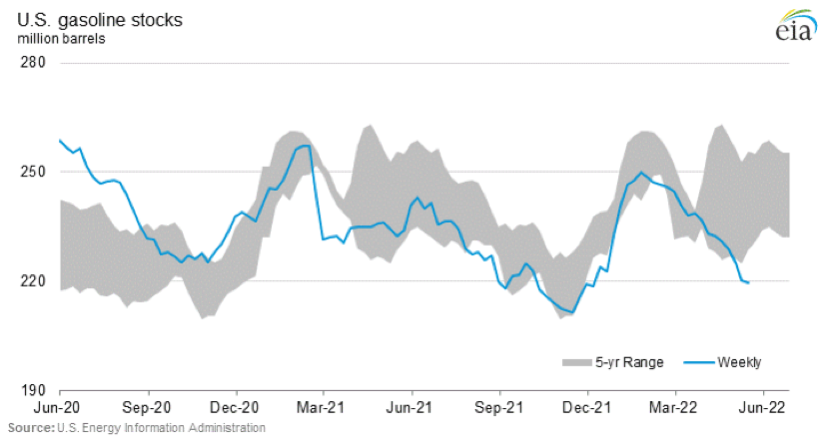 Global oil producers quickly cut capital expenditures early in the pandemic to preserve cash for debt servicing and other operating expenses amid highly uncertain oil demand and plummeting prices that fell to around $20 per barrel. Figure 4 illustrates the decline in oil production from the OPEC and the U.S., the world’s two largest groups of producers. Supply from Russia, the world’s third largest oil producing country behind Saudi Arabia, also declined after its invasion of Ukraine. 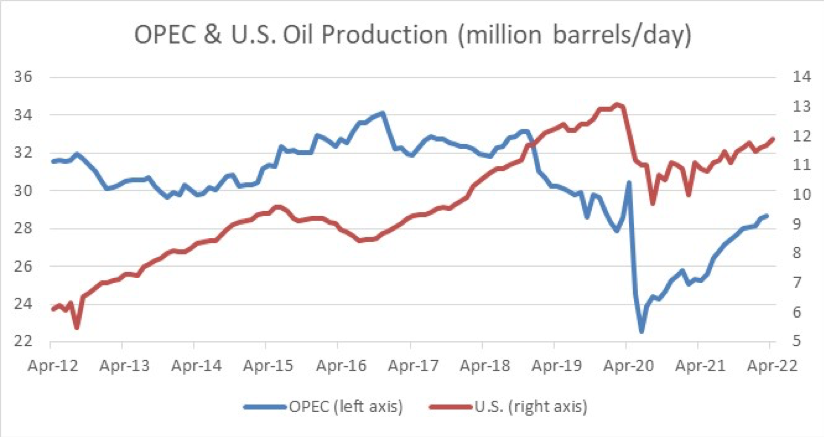 Global oil production is slowly recovering as producers have been more cautiously investing in long-term projects, such as offshore drilling, due to a highly uncertain demand outlook for oil. Traditional automakers, for instance, are investing heavily in electric vehicles amid policy support and plans by several countries to phase out internal combustion engines (e.g., gasoline, diesel) in the coming decades.

Furthermore, shareholders have forced publicly traded oil and gas producers to focus on capital discipline, profitability, reducing debt, and investor returns through dividends and stock buybacks. Production growth was the prior objective from a capital allocation standpoint, but producers struggled to generate positive cash flow and earnings following the 2014–2016 crash in oil prices.

Several other market developments have contributed to a slow recovery in oil production:

For the immediate future (this summer), it looks like gas and oil prices will remain high due to global supply issues, low inventories, and increased travel. There is hope for an ease or decline of prices later in the year with the potential for more supply and lower demand. Please contact my office with any questions or requests for more information on current prices or future forecasts.

This material has been provided for general informational purposes only and does not constitute either tax or legal advice. Although we go to great lengths to ensure our information is accurate and useful, we recommend you consult a tax preparer, professional tax advisor, or lawyer.

Engage with the entire Blakely Financial team at WWW.BLAKELYFINANCIAL.COM to see what other financial tips we can provide for your financial well-being.

and services are separate from and not offered through Commonwealth Financial Network®.